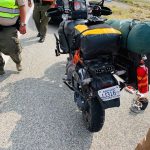 Every single year, my best friend, Matt Allen, and I go on a cross-country motorcycle camping trip. This year I upgraded my 1998 Suzuki Bandit to a 2014 Yamaha Super Tenere - quite the upgrade. I was thoroughly excited for the immediate performance improvements to offroad riding.

The trip changes each year, but generally lasts 10 days. We leave from Louisville, KY and head West, making a new loop each year. We enjoy seeing various parts of the West, so each year we pick a new part of the country to see and experience via motorcycles.

I purchased the bike used in February of 2020 with the Happy Trails Teton boxes and luggage rack already installed. Later in the year I purchased a top box and locks to match the entire set. I made a few modifications (added some handles to the lids and some alternative hardware options to save some interior space).

This year, we departed on September 10th 2020, and through our entire trip we saw and hiked everything from Salt River Canyon, the Grand Canyon, Zion National Forest, Arches nation park in Moab, and back down to the Great Sand Dune National Park and Preserve. For the first time, Matt and I were joined by a friend of ours who rode along with his Honda Civic.

On the morning of Friday, September the 18th 2020, we hiked down from the dunes where we camped the night before, loaded up our bikes with our camping gear, suited up with our riding equipment, and shoved off with the intention of making it to Kansas City by nightfall.

With the Civic in front, myself in second position, and Matt bringing up the rear, we passed the Oasis convenience stop heading south on Colorado 150. We aimed to turn left and begin heading East on Colorado 160, but at the intersection of these two highways was an RV the size of a tour bus obstructing a full view of the street and intersection.

Instead of waiting, the Civic pulled out and I followed suit, having looked both left and right and seeing nothing for miles.

… Except there was something hiding behind the RV.

In my impatience (a mistake I'll never make again) I pulled out in front of a Toyota 4Runner traveling at full speed in a 65 MPH zone. I can only make assumptions as to the actual speed of the 4Runner, but seeing as how the RV was in a turning lane, there was absolutely no reason for the driver of the 4Runner to be going anything less than the advertised speed limit.

The 4Runner caught the lion's share of my back end, narrowly missing my leg, and making complete impact with my Happy Trails left-side pannier.

Admittedly, I remember none of this, and have pieced it all together from various reports of my traveling companions. What was described to me was an explosion of twisted metal and my personal effects. However, when I opened my eyes, laying flat on my back in the middle of the intersection, I realized that I was nothing more than dizzy. I sat up, wiggled my fingers and toes, moved my arms and legs, ensured that nothing was broken, and proceeded to stand up.

I'll save you the following details of concerned onlookers and relieved state troopers and backed up traffic. We've all been witnesses to such scenes. I got very very lucky.

But my luck is only one amazing part of this story.

The 4Runner was rendered inoperable. With the driver-side quarter panel obliterated, tie rod broken (my assumption, as it was evidently unable to steer any longer) and a punctured radiator, the Toyota was in need of a tow.

When I righted my bike, however, things looked grizzly. The pannier was turned inside out, and all of my belongings keeping me alive from the eight following days were scattered along the highway. I sat the bike up, and attempted to start it.

I put it in gear and drove it carefully to the shoulder in an attempt to let traffic pass. It rode straight and true.

I got my trusty tool-tube (an impressively compiled tool kit inside a PVC tube I kept in my pannier) from the side of the highway and dumped my tools out. With nothing but a set of allen wrenches and box wrenches, I removed the left pannier revealing the rack previously holding it in place. The rack had held firm.

Furthermore, all that had really happened is that my muffler was now directly over my rear tire.

After another 10 minutes spent removing the Happy Trails rack and the other pannier, the damage looked downright minimal. I manually forced my muffler back into position and then ran the bike on its center-stand. The rear wheel ran true.

I asked the state trooper for permission to take the bike up and down the road to see if it was rideable.

It was. It was excellent.

The only true damage I could see was that the rear subframe was bent, making the seat a bit off-center. It made for a strange riding position, but certainly nothing I couldn't handle.

The driver of the 4Runner was incredulous. The expression on his face was one of absolute amazement.

The Happy Trails Teton pannier and SU rack had functioned as a kind of crumple zone, absorbing nearly ALL of the impact from a mid-sized SUV driving at full speed down a desert highway, and it left me and my bike almost untouched.

After I took a few minutes to collect myself and write my account on the police report, my traveling companions and I sped off into the distance.

I went on to ride 700 more miles that day, making it to Kansas City, albeit a bit behind schedule.

The following day I rode the remaining trip from Kansas City to my driveway in Louisville, KY, thanking my lucky stars the whole way home.

I write this for no other reason than to give an honest accounting (and perhaps to preserve my own memory) of my experience with Happy Trails products.

Is your pannier going to survive an impact with an SUV? Probably not.

But, if you're as lucky as I am, your pannier will save your bike, your leg, and potentially your life.

I've been given nothing for writing this. And furthermore, I have every intention of replacing my previous luggage system with another from Happy Trails. The product is excellent, and performed astronomically better than anything I would have ever asked of it.

Thank you, Happy Trails team. You got me, and my bike, home in one piece.